A wee bit of time in Ireland

Arrived back in the states a week ago from a 10 day trip to Ireland.

A lovely family member had arranged for about 20 of us to do a tour of the family history sites via private coach prior to the wedding of a cousin.  We had a lovely time and traveling by coach was very nice.  I've never not been the "this is the bus we'll take to the train station where we'll get on the XX:XX train to this station where we'll get off at this stop" traveler, so the ability to wake up in the morning and all I need to do is be outside at 9am was delightful.

It's been awhile since I've posted here, but I figured this was as good a time as any to do an update.

Ireland is a fantastic place for those with specific diets and allergies. The Food Safety Authority of Ireland requires all food (whether packaged or sold in restaurants) be labeled with the allergens the food contains.  There is a standard key by which food is labeled, including on restaurant menus.  I see that the restaurant association includes an option to list the allergens by a letter abbreviation (SS-sesame seeds, E-Eggs, F-Fish, etc.), but all of the menus we saw just included the numbers.  In addition to listing out the allergens, the menus were quite good about labeling food as gluten-free, vegetarian, and vegan.  This was true whether we were dining in a restaurant in Dublin or in a small town of only 2,000 (or fewer).

We ate a number of good things while we were there, but I'll be honest, the best was from the cafeteria at the Cliffs of Moher visitor center.  A very nice caramelized onion and goat cheese quiche with farm carrots and potatoes on the side.

I otherwise ate a lot of soups.  Despite being quite good at labeling food, most menus did not have a good, whole meal option for vegetarians.  I ate a lot of soups, vegetable and potato leek mostly, but never much protein. Pictured below is the potato soup at the cafeteria at Blarney Woolen Mills.  No judgement on the number of soda bottles on Boston's tray, okay! That cider bottle was huge and I couldn't drink it quick enough to stay on schedule (the down side of being driven...) We needed to rebottle into a closeable bottle, so dump the soda and take the cider with! 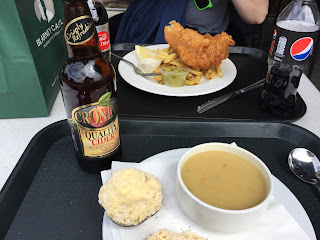 I hope to stick with the blogging thing for awhile.  Looking back at my last posts, I see that I was excited about New World Cafe opening, which has now come, been successful, and closed. There are a number of new restaurants and dining options in Des Moines along with more of the older places offering vegetarian dishes, so plenty of work to do! 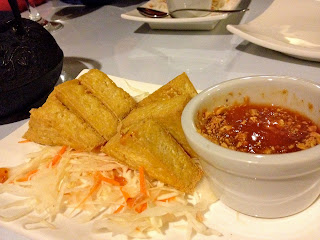