Thanks to a last minute invitation to an art opening in the East Village, Boston and I showed up to the East Village last Friday without plans for dinner.  Driving in, we saw Alba Restaurant first and decided to try it out.  I'd heard good things from friends previously and knew I wouldn't be disappointed.  We were surprised that the dining room was almost empty at 6:30, but it filled to capacity while we were eating.  The space is flanked by two walls of windows looking out on east 6th and Des Moines streets and does not feature a lot of interior lighting which means in the middle of winter at 7pm, it was really dark-hence the lack of photos.

You can find Alba's menu at their website: http://albadsm.com (note, doesn't load well on mobile).  I'm not sure how to classify the food they serve, I suppose contemporary American might fit.

Perusing, the salads and soups looked delicious, but I had heard good things about "Chef's Vegetarian" so I asked.  The waiter was extremely helpful in describing the dish in great detail and noting what could be added/removed to make it vegan.  When I mentioned that I wasn't a fan of mushrooms, he offered to sub sautéed veggies instead.  That is a good waiter :-)   I ended up with what they called a Potato Roti with mixed veggies.  The dish itself was as if they had cooked shredded potatoes in a cake pan and then taken a slice.  Served with a true mix of veggies though all I can remember now was the zucchini.  There was also what the waiter had described as a light blue cheese sauce.  I wouldn't call it light, but it was delicious!  I ordered a mid-price glass of red wine to round out the meal.

Alba isn't cheap-it is probably the most expensive meal I've had in awhile, but it was good.  I'll put it on the list of splurge dining locations for sure.


Alba is located at what I would consider to be the northern edge of the East Village on E 6th st. 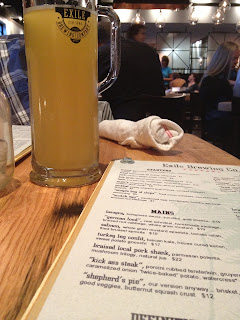